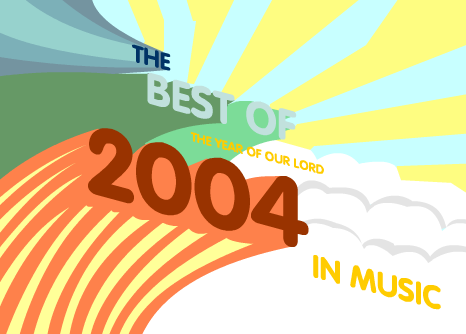 Do you know this list was originally supposed to be done by New Year's? We were completely on track to have it done, too, despite some last-minute additions and squabblings. But it didn't get even close to done, and eventually the new deadline defaulted to April 1, which seemed fitting enough, and, one thing failing to lead to another, here we are moving into the latter third of the following year, and I'm knocking together a stopgap text-only runthrough, if only to get the '04 list done before the '05 list goes up.

People will give guff to 2004 as far as music goes (they will! I've heard them), but they pretty clearly don't know from good years. It was genuinely painful to have to rank some of 2004's albums lower than others, as staggeringly good as many of them were. I'm still waiting for some this year to really make me stagger as much as I did last year, on several non-consecutive occasions.

But anyway, on with it: a list representing almost two years' worth of languor and angry stagnancy, and what we were listening to the whole time through.